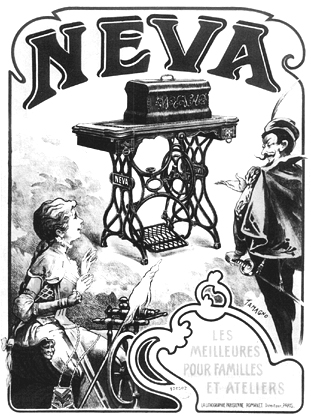 A SEWING MACHINE DEALER’S PAMPHLET. We have several times referred to JNIr. K. T. Hardman who, in addition to carrying on the business of a sewing machine dealer acts as advertisement designer to the sewing machine trade. Mr. Hardman has just issued a pamphlet entitled, “Hints on the Purchase and Use of Sewing Machines,” and sends us a copy of same. To show what one wide-awake dealer is doing, and to encourage others to still further efforts, we abstract the following from the pamphlet: —

COMMONSENSE AS APPLIED TO THE PURCHASE AND USE OF A SEWING MACHINE. (By K. T. Hardman, Sewing Machine Expert.)

In presenting this little Handbook on the purchase and use of a Sewing Machine to our friends and customers in Rochdale and District, we may at once acknowledge that its chief object is to counteract the present tendency, on the part of some members of the public, to purchase a Sewing Machine without due regard to its merits or usefulness, but simply on account of its exterior finish and appearance, the inevitable result being that the purchaser is, sooner or later, wiser, sorrier, and so much poorer. This is partly due to the fact that in Rochdale, as elsewhere, humanity loves a bargain, and when an article is offered, to all outward appearance “just as good, and pounds cheaper,” it proves too seductive an argument for some people, and they purchase it, fondly believing that they have got what was promised them. The most amusing part of the matter is, that those who have been disappointed in this manner are always the most emphatic in their denunciation of the dealer who sold it. How silly and foolish. What else can they expect. Good stuff always commands a fair price, and is by far the cheapest in the long run.

Another reason why these inferior foreign machines are offered to the public is the keen competition in the trade, unfortunately at present, in some cases, in the hands of those who know little of the article they sell, and whose chief argument is “cheapness,” and in their frantic efforts to attract custom, depend rather on the low price of the article they offer than any merits it may, or rather should possess. Now, as it is a fact that the better known makes of machines, such as Wheeler and Wilson’s, etc., etc., cost all dealers the same prices, it will at once be seen that no so-called “cheap” shop can offer these high-class goods at “pounds less” than elsewhere. For all practical purposes. the greater part of these cheap machines are of German manufacture, and upon an obsolete principle commonly known as the Singer Medium, a long abandoned style, so far as the better makes are concerned; owing to the many defects contained therein, among others being the fact that the movement is obtained by means of gear wheels, causing- and setting up much noise and friction, making the machine heavy to run. These gear wheels can be seen if the plate on the back of the arm of machine is removed, and intending purchasers should insist on this being done, our advice being “don’t” if the machine is on this principle. The shuttle in these machines is shaped something like a rowing boat, and in most cases requires a deal of threading. The needle is very difficult of adjustment, in fact it is, to anyone with weak sight, impossible to set such a needle. The metal out of which the bearings are made is soft, and quickly wears in use. The highly elaborate woodwork is simply thin veneer, which quickly peels off in a damp atmosphere, or cracks and blisters in a warm one.

The machines are produced by overworked, underpaid, and sweated workmen. This fact alone should weigh with working people. In almost every case the machine appears under some fancy name or title, such as “Starlight,” “The Household Delight,” etc. These are not, of course, actual names in use, but will suffice to put intending buyers on their guard. The safe rule is—never buy a Sewing Machine unless the maker’s name appears in a prominent place. If the machine is any good the maker will be only too anxious to put his name on it ; if it is not, he will take good care that its place of origin is left unknown. We may here give some slight information as to the birth of this labour-saving device, its development and improvement, and the two chief principles at present in use.

As early as the eighteenth century the crude idea of a machine which would perform the functions of the seamstress, seems to have entered men’s heads, and more or less imperfect and unsatisfactory models were created. It was left for Elias Howe, a young American mechanic, to evolve the first practical lock-stitch machine in or about the year 1844, and the history of Howe’s early struggles is an interesting one. We’ve give an illustration of Howe’s first machine, and do not doubt it will prove an interesting comparison with the latest type of modern machinery for stitching. Strange to say, America would have none of this new invention, and Howe in despair, and with almost no resources left, came to England, and succeeded in interesting a manufacturer of corsets, carpet bags, etc., in Cheapside, London, in his invention, with the result that a machine was disposed of at what now seems the huge price of two hundred and fifty pounds, and an understanding that, if the machine came into general use, the inventor was to receive a royalty of three pounds on each one sold. As a matter of fact Howe’s troubles, instead of being at an end as might be thought, were only beginning, as, on his return to America with only two shillings in his possession, he found his machine was being copied, and for some years from this date his life is a record of struggling against privations and hardships of a most severe character, and, to add to his other troubles, his wife died during this difficult period. It is pleasing to be able to record that in the long run Howe met with his proper reward, and derived a princely revenue from the sales of his invention. In the year 1867 he was decorated with the Cross of the Legion of Honour by the French Government, but he did not long’ enjoy the honours and rewards which his invention had brought him, for on the 3rd of October, 1867, Elias Howe died at Brooklyn, New York, to the deep regret of his innumerable friends, who not only honoured him for his inventive genius, but also for the excellent personal characteristics he possessed. Howe’s system of securing the desired result was by means of a shuttle operated by reciprocating movements of the machinery. Of this more hereafter.

On the 1st of April, 1849, a cabinet maker, of Adrain, in Michigan, U.S.A., perfected his idea of a machine for stitching, but, strange to say, with no knowledge of Howe’s efforts, and the principle invented by this young cabinet maker, Allen B. Wilson, was of a totally different kind to that of Howe’s machine, and from both a mechanical and practical point of view was decidedly the superior one. It is known as the “Rotary Hook” principle, and is in every way superior to any shuttle machine, and with many improvements, during a period of over fifty years has been adhered to by the well-known firm of Wheeler and Wilson, a firm employing thousands of highly-trained and well-paid hands in their great works at Bridgeport in the United States, the original home of the sewing machine. Over nine hundred varieties are now manufactured, adapted for every conceivable class of work and material.

This make of sewing machine, for which we are sole agents in this district, is without doubt the finest article on the market, and so great is our confidence in it that we are prepared to send out one on approval to any respectable householder, to be tried against any other make whatever. We are confident of the result. Of course we can supply any other known make from stock when wanted. Our only reason for recommending this particular make before all others is our knowledge that it is the best value possible. Fitted with ball bearings, noiseless, ex- Ironically quick and light to run, with no troublesome shuttle to thread, having a self-setting needle, very moderate in price and good for twenty to thirty years’ service, we recommend it strongly to keen and careful buyers, who realise that before any article can be really cheap it must be “good” as well.