Fitting Sewing Machines for Steam Power.
By a Singer Machinist

Unless carried out by trained engineers, the fitting down of machines to run by power of any sort is frequently very badly done. The need for some definite directions upon this subject by sewing machine mechanics is strikingly apparent, for, however clever many of these hard-working men may be in their legitimate employment of adjusting machines, they are apt to be ” fogged ” when called upon to fit up a large stitching-room with various makes of machines, all to run by power, possibly at varying or various speeds. How to Lay Line Shafting.—-We may first consider a case where an unbroken line of benching and machines, possibly a duplex bench, extending to a length of 50 feet, must be laid. It will be seen that this case will tax the abilities of even a good fitter of shafting, for if everything be not perfect and true, such a line will require tremendous power to move it. The bearings will become hot, and it will be impossible to keep them cool, and the various couplings and junctions will soon work themselves loose, resulting in the ultimate breakdown of the whole line, possibly at several points. How different from this is the well-laid shaft, as straight and true as line and level can make it, that can be moved freely by the effort of one hand, and in which all the bearings keep as cool as any other piece of metal in the room. The first thing to consider is the position required for the shafting. We may suppose that it is intended to run the length of the room, and occupy the middle space.

We may further suppose that we have to deal with an ordinary wood floor, which is never too level. Let operations commence by getting the width of the room at both ends. This is easily done by means of a tape line or cord, cut the exact length, and afterwards double, to find the exact centre. Chalk marks must be made upon the flooring at those points at each end, also in the middle of the length. This will result in a line parallel to both walls—if they be parallel—but not necessarily straight. It is a good plan to fix one end of a stout cord to a spike driven in at one end, to well chalk this line and lay it from end to end, tightly stretched, in proper position ; a corresponding chalk line upon the floor can then be obtained by raising the line at several points and allowing it to rebound upon the floor. This line should be quite distinct and perfectly straight when tested by the eye. It will form a useful guide in laying the shaft, and should save much trouble.

The Shafting.—Shafting now in general use for sewing machines of the best systems measures I J inch in diameter, and is usually bright turned, in lengths of 12, 14, and even 16 feet. The 12 feet lengths are very convenient, especially when they must travel considerable distances. Shafting of I inch and 1^ inch are quite common, but are too slender for great lengths. Couplings and Keys.—These are usually bright-turned flange couplings, connected by three bolts and nuts. The two parts should be a ” driving fit ” upon the shafting. Before proceeding to key the couplings, they must be separated, and the positions of the respective halves noted, otherwise they are apt to run untrue. In fitting up shafting the necessary tools, as vice, chisels, and files, should be arranged upon a convenient bench. The end of the piece of shaft being fixed in the vice, a sharp chisel may be used, assisted by a file, to either cut a key bed or a key flat, to accommodate half the thickness of the key. Of these two methods the key bed is undoubtedly the best, for, a good fit once secured, it is next to impossible for such a junction to work loose again. To fit the key, then, make the key bed barely deep enough, but of the correct width, to allow the key to drive in.

Fit in the coupling half and try the key in its place. It should not enter. It should be sufficiently full to require a portion being removed from its thickness. This is best done by draw-filing. When the key is a tight fit it may be driven in the whole distance, provided everything is clear for it. If the key should drive easily it is too loose, and another key must be fitted. Let us be quite clear as to the position of this key. For a plain cylindrical or box coupling, all in one piece, a single long key is very generally used. In this case a long key bed is .made in the coupling from end to end, and a similar key bed must be formed in the two lengths of shafting to be connected, as represented in Fig. 1, at a and a 1.

But this plan, although both simple and effective, is not often used in sewing machine shafting, the flange coupling in two parts being in greater favour. Now, the plain box coupling may be keyed up with one- long key, or with two keys fitted in at either end. No other way can be adopted for this kind of coupling, but two keys, unless they be headed keys, should never be used, since it is next to impossible to uncouple such a connection if required. The keys to be used for flange duplex couplings, such as we supposed to be used, will be plain keys.

They must be driven in from the end of the shaft, not from the end of the coupling, and they should be flush with the flange face, or rather further in, to avoid contact with the other face, and the throwing of the coupling out of truth when bolted up. The key bed or key flat should always be carried a little to the right, beyond the coupling, to allow of the key being driven out again if required (Fig. 2. where a is correct, and b a faulty method of keying). When once a connection of this sort is made the truth of the flange should be tested, for, however true the arrangements may have been, there is apt to be an error in the keying up. This should, when practicable, be done by mounting the shaft in a lathe, and turning off any untruth from the flange face. But such jobs are usually done away from lathes or such tools, and the mechanic is generally obliged to adopt some more primitive method. It may be done fairly well by mounting the piece of shafting in two or three floor stands or bearings, setting some temporary centre against the shaft at the free end, and getting the shaft to revolve, preferably by a band from the main, or, lacking this, by hand. We have devised for this purpose in country places a well-fitting cylinder, screwed to the shaft, and revolving freely, but without end play, in a kind of stand screwed to the floor.

This, with two other bearings, and a crank at the far end of the shaft, constitutes a kind of rude lathe, and the flanges can easily be tested and corrected with a sharp hook tool, graver, and hand rest, also screwed to the floor. All the lengths of shafting, after being fitted with coupling halves, are treated in this way before a single connection is made. It is as well to note that the second flange be not keyed on before all the hand wheels and bearings are placed upon it in their correct positions, so as to be opposite to the machines to be driven. But the proper distribution of the bearings calls for some special remarks. The generally-accepted rule for lj in. shafting is to allow a bearing for every 6 feet, but never less than this, and more often a greater number is imperatively necessary.’ This arises from two things, well known to engineers. There is first the necessity for providing a bearing near or close to every coupling, and also two bearings, one on either side of the main driving belt. As a general rule, therefore, it will be found that 50 feet of shafting will need at least to run in ten bearings, more commonly twelve or fourteen.

Thus for 25 feet seven bearings is no uncommon number. But the distribution of the bearings must always be considered subservient to the positions of the band wheels, and all this must be schemed out. The quickest way to distribute both is to have the benches cut and pierced for bands before laying the shafting. These can then, if for a double bench, be placed alongside the shaft line in their proper position, but simply laid upon the floor—thus, at a glance, the band wheel positions can be seen, and the bearings accordingly. All this must be done before the second coupling flange is keyed upon the length of shafting. It is well known that the floor shaft stands used generally for sewing machines are simply complete cylinders, and not, like plumber or wall boxes, made in halves, so that they must, the cylinders of them (or bushes “), at least be placed upon the shaft before coupling up both ends. The band wheels generally used are either 10 or 12 inches in diameter, and are provided with set screws. They are either plain, which is the common sort, or split, the two halves presenting the advantage of being easily separated for placing upon the shaft in proper position. To commence to actually lay the shafting a beginning should be made at the main driving end. We will consider that a belt may easily be run from the line shafting of the factory on to one shaft. At this end two belt pulleys must be provided, a fast and a loose pulley, the latter to take the belt from the shifting lever for stopping. They are usually of 10 in. diameter and 3 in. face, flat. Two bearings are to be provided here, one at either side of the pulleys, but before they are placed a collar should be attached to the shaft outside the loose pulley to confine it against the fast pulley. In most cases two kinds of shaft floor stands are provided. Those with narrow bases are used for the ordinary work, and those with extra wide bases for the driving end of the shaft. Two of these latter therefore are to be used. to be continued… 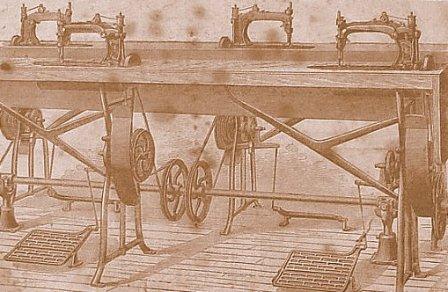